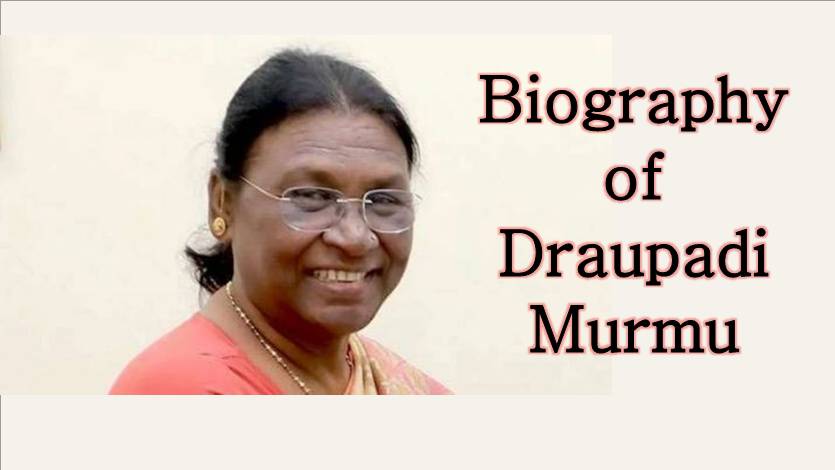 Draupadi Murmu Biography:- Draupadi Murmu was born on 20 June 1958 in Baidaposi village in Mayurbhanj district of Orissa. Draupadi Murmu comes from the Santhal tribe group. He struggled a lot to build his future in spite of adversity.

Draupadi Murmu’s new journey began on 21 June 2022, when she has been nominated for the country’s next President’s post by the NDA, the Bharatiya Janata Party-led coalition.

Draupadi Murmu, a tribal woman leader, is the Modi government’s first choice for the presidential race. He is up against Yashwant Sinha, a former Union minister, who is the joint opposition candidate for the July elections.

If elected, the 64-year-old will be the first tribal woman to become the President of India.

The BJP parliamentary board discussed 20 names for the presidential candidate, it was decided to choose one from eastern India, one tribal and one woman.

Draupadi was born on 20 June 1958 in Baidaposi village of Mayurbhanj district of Odisha. His father’s name is Biranchi Narayan Tudu. She belongs to the Santhal family, which is a tribal ethnic group.

Draupadi was married to Shyam Charan Murmu who is no longer in this world. She had two sons who are no longer alive and a daughter named Itishree Murmu with the help of whom she is living her life with relief.

He got his early education from Odisha Private School. After that she attended Rama Devi Women’s College,

He took admission in Bhubaneswar, Odisha from where he obtained his graduation degree in Arts.

He started his career as an assistant teacher at Sri Aurobindo Integral Education Center in Rairangpur. Thereafter, he worked with the Government of Odisha as part of the Department of Irrigation and Power.

Murmu’s political career began in 1997 when he won the local elections as a councillor. In the same year, she became the state vice-president of BJP’s ST Morcha.
Contesting on a BJP ticket, Murmu won the Rairangpur seat twice, becoming Minister of State (Independent Charge) in the Government of Odisha in 2000.

During the Bharatiya Janata Party and Biju Janata Dal coalition government in Odisha, she was Minister of Independent Charge for Commerce and Transport from 6 March 2000 to 6 August 2002.

In the year 2007, Murmu was awarded by the Odisha Legislative Assembly for being the best MLA of the year incidentally.

Over the next decade he held several key roles within the BJP, serving as the ST Morcha’s state president and Mayurbhan’s BJP district president.
She was the Minister of State for Fisheries and Animal Resource Development from August 6, 2002 to May 16, 2004.

The Legislative Assembly of Odisha honored him with the “Neelkanth Award” for the best MLA of the year 2007.

He was promoted to the post of district president of the party for Mayurbhanj district in 2013.

Voting for the presidential election is to be held on July 18 and the counting of votes will take place on July 21. June 29 is the last date for filing nominations.

We know that Draupadi Murmu Biography let,s know Draupadi Murmu Net Worth .Draupadi Murmu is not the owner of much wealth even after being a female politician, she only has the property to manage her house in the worst of circumstances, which is only Rs 9.5 lakhs. Apart from this, neither any jewellery, nor land nor any movable and immovable property.

Friends, I hope you have liked the blog “Draupadi Murmu Biography” if you like my If you liked this blog, then share it with your friends and on your social media account, let people know about it too.

If you have any feedback, then definitely tell us by going to Contact Us you can email me soon I will meet you with a new blog till then “Thank you for staying on my blog”